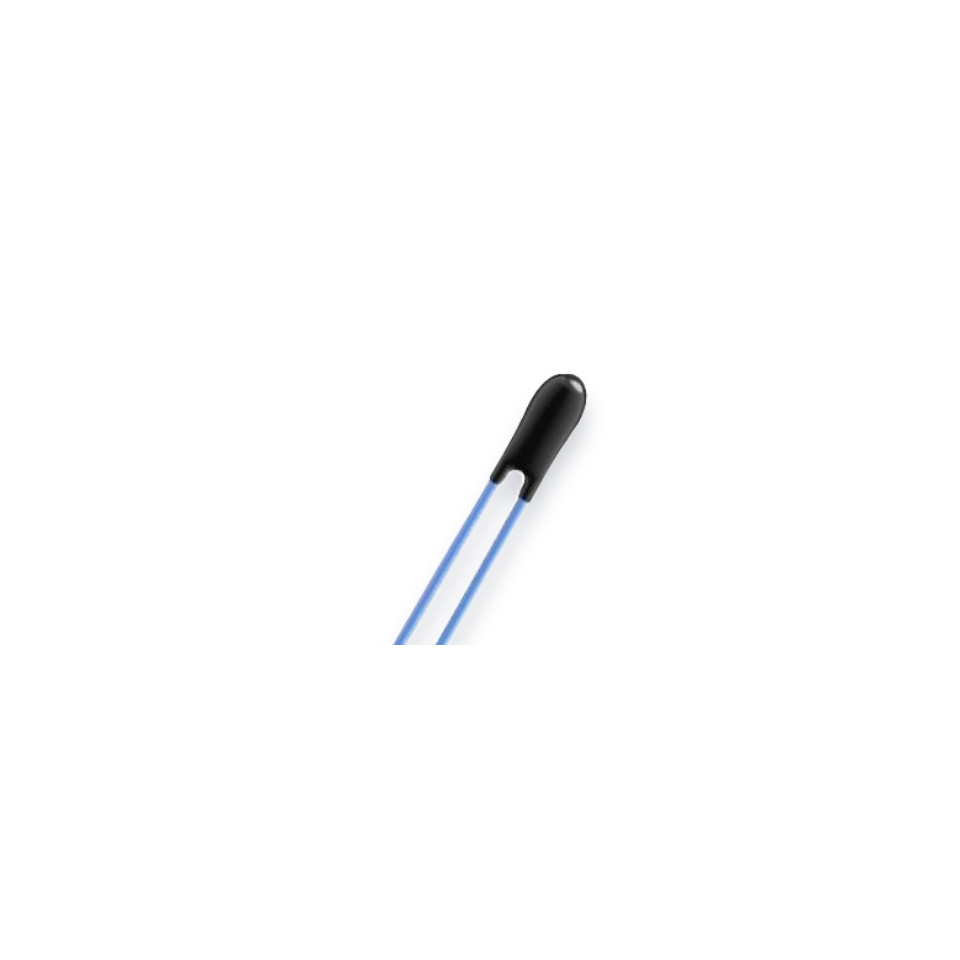 A thermistor is a thermometer whose resistance depends on temperature. The term is a combination of "thermal" and "resistance". It is composed of metal oxides, pressed to form a bead, disc or cylindrical shape, then encapsulated in an impermeable material such as epoxy or glass.

There are two types of thermistors:

The arrow next to T means that the resistance is variable depending on the temperature. The direction of the arrow or the bar is not significant.

Thermistor sensors are easy to use, inexpensive, robust, and react predictably to changes. Although they do not perform well with very low or high temperatures, they are the sensor of choice for applications that take temperature over a low measurement range. The thermistor is ideal when precise temperature control is required.

Some of the most common uses for thermistors are in digital thermometers, oil and coolant temperature measurement, household appliances such as ovens and refrigerators.

How does the thermistor "measure" the temperature?

Unlike other measurement probes, thermistors are nonlinear, which means that the points on a graph representing the relationship between resistance and temperature will not form a straight line. The construction of the thermistor determines the location of the line and its evolution. A typical thermistor graph looks like this:

Figure 2: resistance as a function of temperature

What is the difference between a thermistor and other sensors?

In addition to thermistors, several other types of temperature sensors are used. The most common are resistance temperature detectors (RTDs) and integrated circuits (ICs). The measurement probe that works best for a particular purpose is based on many factors.

Temperature Range: The approximate global range of temperatures in which a probe type can be used. Within a given temperature range, some sensors perform better than others.

Cost: Relative cost when these sensors are compared to each other. For example, thermistors are inexpensive relative to RTDs, in part because the material of choice for RTDs is platinum.

Sensitivity: The approximate time required to move from one temperature value to another. This is the time, in seconds, required for a thermistor to reach 63,2% of the temperature difference between the initial reading and the last one.

What forms of thermistor are available? 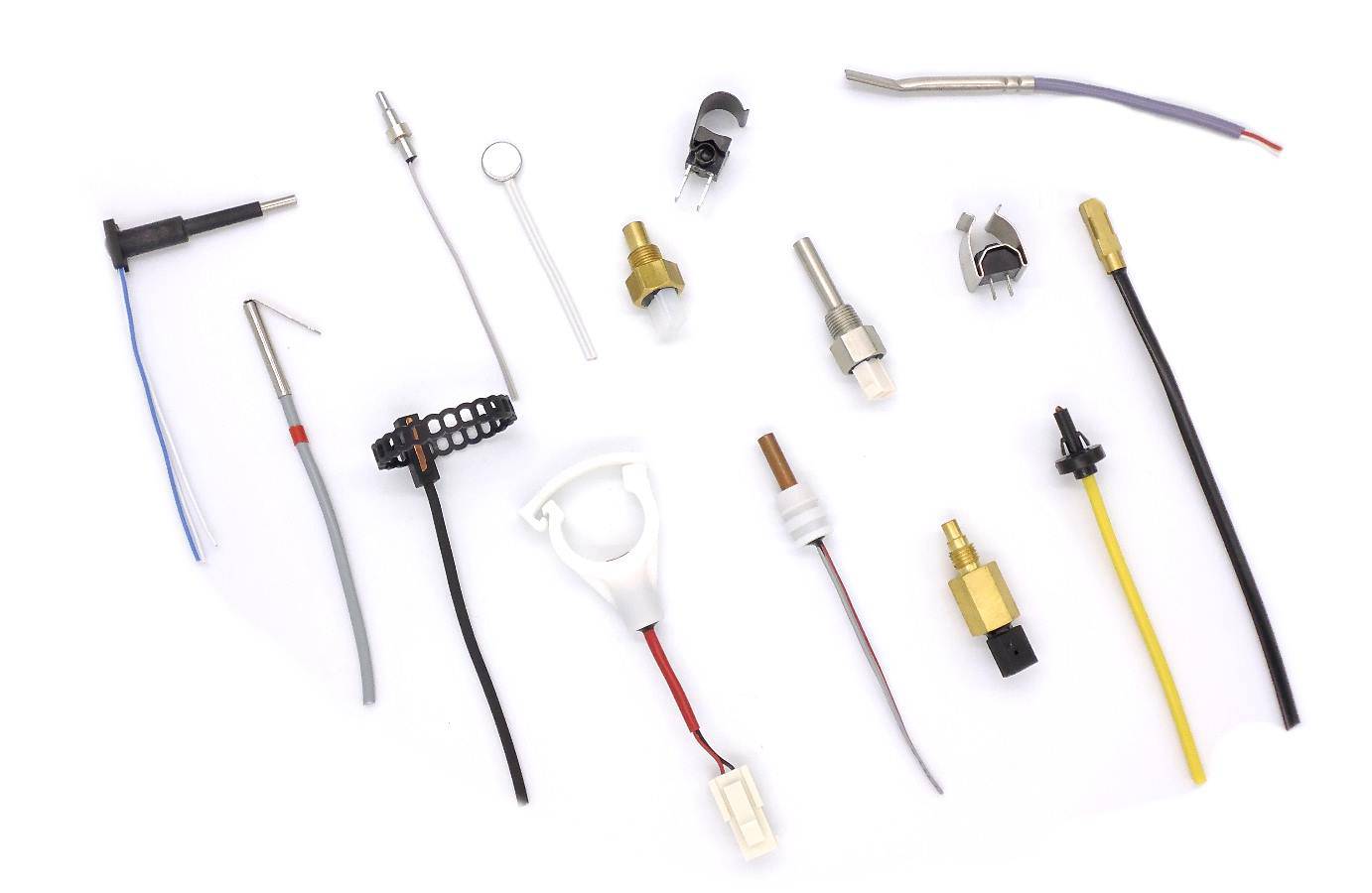 Thermistor temperature sensors come in a variety of forms—disk, chip, bead, or rod—and can be surface-mounted or integrated into a system. They can be encapsulated in epoxy resin, glass, baked phenolic resin or painted. The best shape often depends on the material being monitored, such as a solid, liquid, or gas.

A thermistor chip is normally mounted on a printed circuit board. There are many different forms of thermistors.

Choose a shape that allows maximum surface contact with the device whose temperature is being monitored. Regardless of the type of thermistor, the connection to the monitored device must be made using a high thermal conductivity paste or an epoxy adhesive. It is generally important that this paste or glue does not conduct electricity.

How does a thermistor work in a controlled system?

Ideally, the thermistor is built into the device, but it can also be attached using heat-conducting paste or glue. Even if a measuring device is integrated, air gaps must be eliminated with thermal paste or glue.

What are the upper and lower voltage limits at the input of the temperature sensor?

The voltage is related to the resistance (Ohm's law). This equation is used to determine which polarization current is needed. Ohm's law stipulates that the current passing through a conductor between two points is directly proportional to the potential difference between the two points and that, for this bias current, it is written:

U is the voltage, in Volts (V)

I BIAS is the current, in Amps or Amps (A)

I BIAS means that the current is fixed

R is the resistance, in Ohms (Ω)

The controller produces a bias current to convert the resistance of the thermistor to a measurable voltage. The controller will only accept a certain voltage range. For example, if a controller range is between 0 and 5 V, the voltage of the thermistor should not be less than 0,25 V so that the low-level electrical noise does not interfere with reading, and is not greater than to 5 V to be read.

Suppose the use of the controller ATR121 and a 10 kΩ thermistor (B25 / 85: 3435K), such as the sensors Universal NTC waterproof 10kOhm B3435 1500mm - Guilcor , and that the temperature that the device must maintain is 20 ° C. According to the data sheet, the resistance is 10 000 Ω to 25 ° C. To determine if the thermistor can work with the controller, we must know the usable range polarization currents. Using Ohm's Law to solve I, we know the following:

Yes, this thermistor will work if the bias current of the temperature controller can be set between 25 μA and 500 μA.

When selecting a thermistor and a bias current, it is best to choose a sensor whose voltage is in the middle of the range. The return input of the controller must be energized, derived from the resistance of the thermistor.

The most accurate model used to convert the resistance of thermistors to temperature is called the Steinhart-Hart equation.

What is the Steinhart-Hart equation?

The Steinhart-Hart equation is a model that was developed in a time when computers were not ubiquitous and most mathematical calculations were done using slide rules and other mathematical tools, such as than the transcendental function tables. The equation was developed as a simple method to model thermistor temperatures easily and more precisely. The Steinhart-Hart equation is as follows:

A, B, C, D and E are the Steinhart-Hart coefficients that vary with type. of the thermistor used and the temperature range detected.

The standard Steinhart-Hart equation used is:

One of the advantages of computer programs is that equations that would have taken days or even weeks to solve are solved in moments. Type "Steinhart-Hart Equation Calculator" into any search engine and pages of links to online calculators are returned.

How is the Steinhart-Hart equation used?

Who are Steinhart and Hart?

John S. Steinhart and Stanley R. Hart first developed and published the Steinhart-Hart equation in an article entitled "Thermistor Calibration Curves" in 1968, while they were researchers at the Carnegie Institution in Washington. . Steinhart later became a professor of geology and geophysics, then studied marine science at the University of Wisconsin-Madison, and Stanley R. Hart became principal investigator at the Woods Hole Oceanographic Institution.

Thermistor meters, as part of a temperature control system, are the best way to measure and control the heating and cooling of a Peltier device. Their ability to adjust per minute allows for maximum system stability. Thermistors can be integrated or surface mounted on the device requiring temperature monitoring. Depending on the type, they can measure liquids, gases or solids.

Are you looking for information about PTC and NTC sensors? Go directly to the dedicated page!